A poet, Michelle does not have a dedicated space for writing.  She writes at home, around town, on the bus and, more often than not, curled up in her bed.  Where would Michelle's studio be on this sunny August Sunday?  She decided on the beach and so we headed to Madison Park with towels, swimsuits and sunglasses.  And ice cream.  It is summertime, is it not?

Here is Michelle in her ‘studio’: 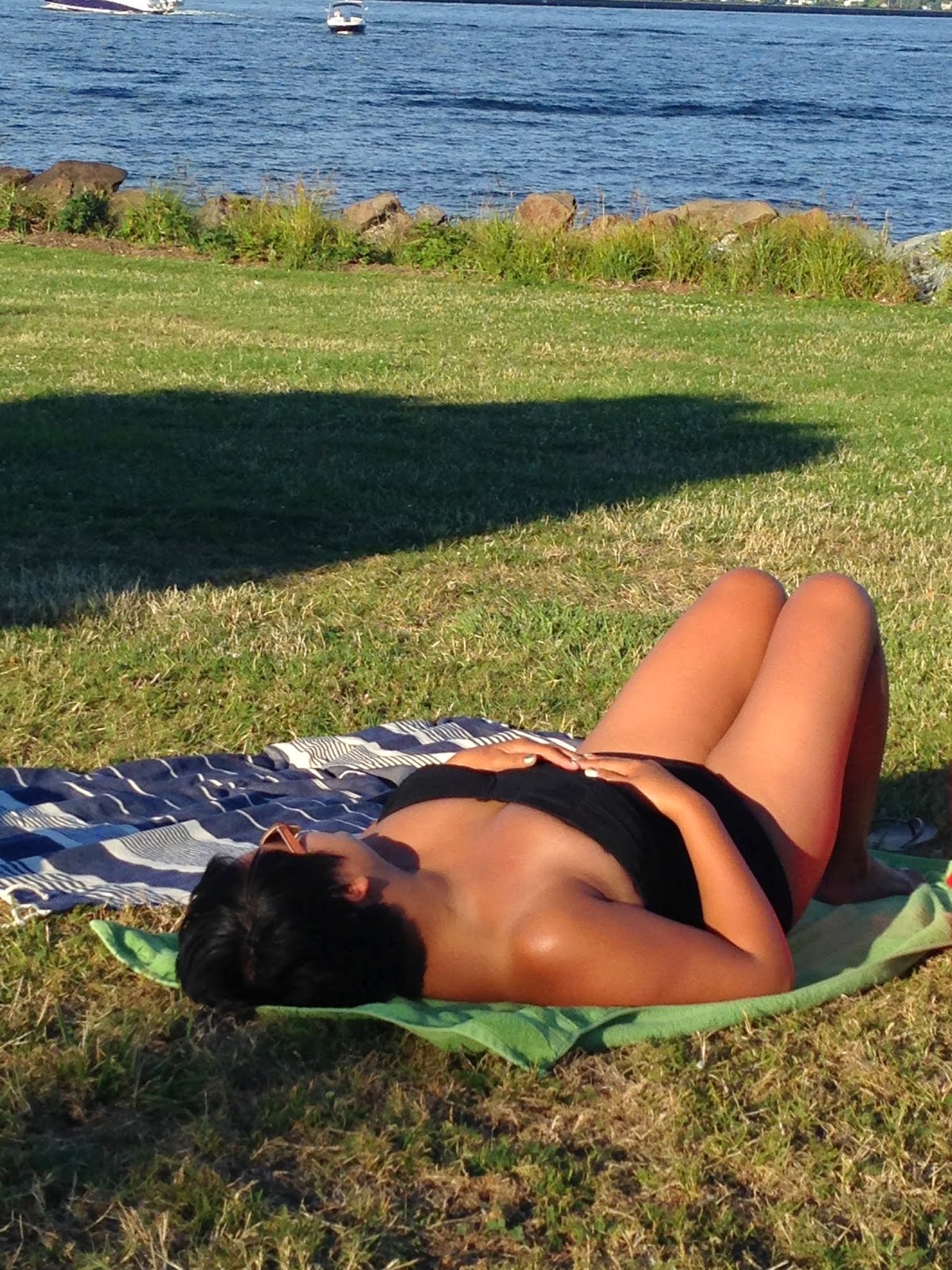 And while this looks pretty lovely and relaxing, I must say, interviewing a poet was a bit of a challenge.  Don't let this photograph fool you--Michelle is serious about words. She listened carefully, examining the specific verbiage and context of each of my inquiries.   If Michelle were not so delightful to be around, this would have been entirely unsettling.  Michelle, herself, is astoundingly masterful in her ability to select and arrange language.  Her poetry is smart and direct and poignant and really, truly, overwhelmingly beautiful.  Beautiful in both its rhythm and its precision, and also in the manner in which she manages to describe people, relationships, places and the reality of existence in ways that are in equal measure delightful and difficult.

Michelle thinks of her poems as dedications—not in the Casey Kasem type way—of course they are less cheesy and way more eloquent.  They are dedications to people, often to her mother, to god, to her father, to all three or to someone else altogether or to a place.  She often writes in first and second person, as though she is speaking directly to these people or giving them voice to speak through the poem.

For the last year Michelle has been working on a project called Landscape / Heartbreak. She describes this project as a “literary cartography of heartbreak in Seattle collected and rendered through a chapbook of poems and maps.”  It’s pretty simple: people take Michelle on walks from Seattle’s Richard Hugo House (Michelle is a Made at Hugo House Fellow this year) to specific places in Seattle where they’ve had their hearts broken.  They talk about their heartbreak and the landscape along the way and then Michelle writes poems and creates maps in response to these walking conversations.

Michelle explains, “I'm interested in itineraries--poems based in movement through landscape and the way that movement leads to epiphany, meditation, and memory.  Also, I am invested in poetry as a means to process trauma; I'm fascinated by the way we form our memories within the context of our physical landscapes. How do our physical surroundings mark our internal landscapes? How do we respond to returning and traversing our landmarks? What kind of story can a city tell if this isn't just the corner of Broadway and John, but the corner where X learned that Y never really loved him? Or if this isn't just the hospital across the street from your favorite coffee shop, but the place where Z told her mother she loved her for the very last time? How does access to the narratives of the people in a city change the way we experience that city's physical landscape? “  In this way, Michelle’s current work is very much caught up in our local landscape and the ways in which its inhabitants negotiate being alone and being together.

Michelle does not consider herself to be a Northwest poet.  Born in Michigan and mostly raised in Tennessee, the daughter of two immigrants, Michelle believes that the label of "Northwest Poet" betrays the complexity of her personal and familial history.  She considers herself to be a poet who chooses to live in Seattle.  However, having lived in the Northwest for several years now, she agrees that the place, the weather and the people have certainly seeped into her work.

For To Be Alone Together Michelle is exploring a new way to combine poetry and place.  Michelle was assigned this quote from Barbara Straker James, Curator Emeritus at MoNA:

"The Museum of Northwest Art is dedicated to the art of this region.  The idea of a "special Northwest vision" and the museum that emerged from it owes its genesis to the artists who came of age in the cultural isolation of the late 30's and 40's.  Never a school, neither wholly consistent, nor totally inclusive it nevertheless succeeded in creating a fresh language and new imagery which established a regional identity for the first time.  But time and art move on -- like rivers of the Northwest which are narrow at their source and broad as they sweep down into the valleys; art defies limitation, ignores restraints, moves on in endless flow, redefining itself, absorbing new influences, facing new challenges.  The Museum of Northwest Art reflects this flow."

Unfamiliar with much of the work that this statement refers to,  Michelle turned to the artwork itself to begin to understand the idea of this "special Northwest vision."  It is the artworks themselves, along with the museum, as their home, that Michelle will draw upon for her new work.  After visiting MoNA Michelle was particularly struck by a multi-paned skylight that illuminates the stairwell and the gallery space.  For the exhibition she is working on a new poem that utilizes the space of the skylight and takes its form from the idea of stanzas that could work alone and together. In creating this work, Michelle discussed a poetic structure called a ghazal (pronounced “guzzle”) for a starting point for her poem.

Ghazals are comprised of a series of couplets that are related, but are not sequential or in a strict narrative.  Michelle explained this poetic structure to be as though each set of lines is a bead within a necklace; each bead can be appreciated independently, but when strung together, the arrangement of beads forms a necklace.  While Michelle's poem will not technically be a ghazal, each stanza will reference one of the works selected from MoNA's collection for the To Be Alone Together exhibition.  And, barring any major technical challenges, each stanza will be installed on a panel of the skylight in vinyl lettering.  Viewers will read the poem through shadows cast on the floor by the lettering in the skylight.  The parts of the poem that are visible will change as the light shifts over the course of the day.

This is a new way of composing a poem for Michelle.  Rather than starting with language or a story, she has started with the skylight as a space and has let that create the literal and conceptual boundaries of the work.  She shared that this new approach to writing a poem is exciting.  It is also scary.  Michelle's new poem also borrows language from the titles of the artworks in the show as well as from the Modernism in the Pacific Northwest: The Mythic and the Mystical Exhibition at the Seattle Art Museum.  I’ve gotten a sneak peak at a draft of the poem and can say that I think it is phenomenal.

Finally, I asked Michelle to pick one: alone or together?  Together.
Here is the two of us together: 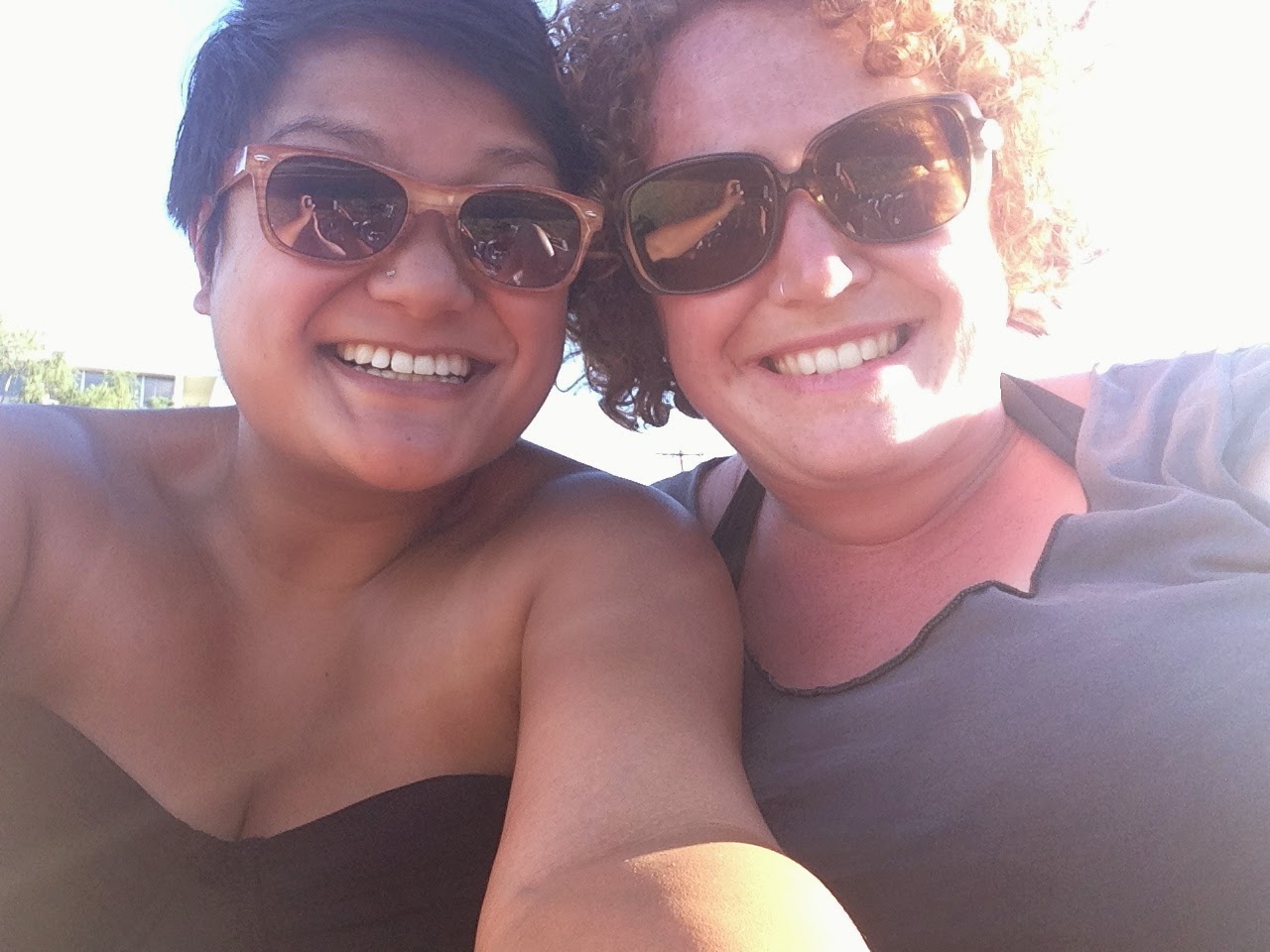 Thanks for a lovely afternoon in your studio Michelle!


In addition to seeing Michelle's new work at MoNA October 4th, 2014 - January 4th, 2015, as part of To Be Alone Together, you can catch up with Michelle in the following ways:

Find out more about Michelle’s writing, readings, publications and other creative projects on her website:  http://www.michellepenaloza.com/